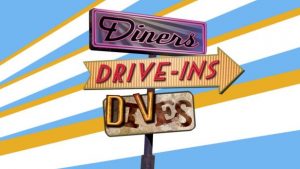 As many of you have already heard, Old Town was recently visited by one of Food Network’s stars, the energetic and spiky-haired Guy Fieri. Although his signature Camaro spent much of the time it was parked on Turner St. under a car cover, it didn’t take long for passer-bys to figure out someone special was in town and they were noshing on some delicious food at Old Town’s very own Meat Southern BBQ.

As host of Diners, Drive-Ins and Dives, Guy takes pride in visiting eclectic places that boast great food and presenting them to his viewers, surely to serve as inspiration to all of us who are looking for foodie adventures. Meat’s menu, which specializes in carnivore cuisine, serves up sandwiches with whopping flavor (Pork Belly Reuben anyone?), beef brisket (yes, please!), smoked chicken wings (is twelve enough for one person?), and plenty of signature sides like spicy creamed corn. Oh, and there are four in-house sauces at your ready to add that last bit of wow to your meal. Honestly, I’m a little surprised it took so long for Guy to get here.

Although taping a show like this takes hours and requires owners to close their restaurant to the public while doing so, the payoff is worth it when viewers come to see what the fuss was about. Citizens and patrons of Old Town should look for a boon in traffic once the episode airs on Friday, September 16, at 9 p.m. on Food Network.

While in Lansing, Guy also visited Zaytoon, Capital City BBQ and Eastside Fish Fry & Grill, however not all restaurants will appear in the same episode.

I’m not sure what the rest of you have planned for Friday night, but mine may happen to include a little time on the couch with fancy snacks while waiting to glimpse a bit of Old Town (and a few of my close friends) on network television.

Other articles about Guy’s visit: