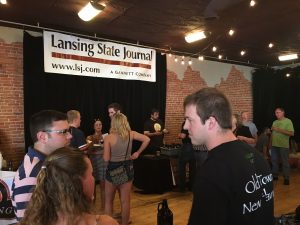 More than 100 beer lovers gathered at The Marquee on May 24 for the first brewers showcase hosted by the Lansing State Journal. News and Brews, as they called it, brought nine breweries from the greater Lansing area together in Old Town for a great evening of sampling beers and chatting about the local beer industry.

LSJ business reporter Alex Alusheff said that the paper wanted to host the event to promote the local craft beer scene. Michigan cities like Grand Rapids, Ann Arbor and Kalamazoo already have a name for themselves in the beer industry, but Lansing is getting it’s own place on that map he said.

“The Lansing area has gone from two breweries to eleven in only four years,” Alex commented. “Places like Lansing Brewing Company have a mainstream following, but there are other breweries out there.”

Ellison Brewery + Spirits is one such hidden gem in East Lansing. Located at the end of an industrial drive behind the former Paul Revere’s Tavern, the place can be easy to miss. Their Tiramisu Stout was one of the fan favorites at the event and well worth a visit to it’s birthplace. Other notable crowd pleasers were Strawberry Pail, a pale ale from Charlotte Brewing Company, Golden 7 Weizenbock from Old Nation Brewing Co. out of Williamston and the Art Deco Amber from The Gallery in Portland.

Father and son duo, Dan and Kyle Malone were also on hand to promote their future Old Town business Ozone’s Brewhouse. This brewery and beer garden located at 305 Beaver St. is still under construction, but Dan hopes to open the doors by the Festival of the Moon & Sun on June 24.