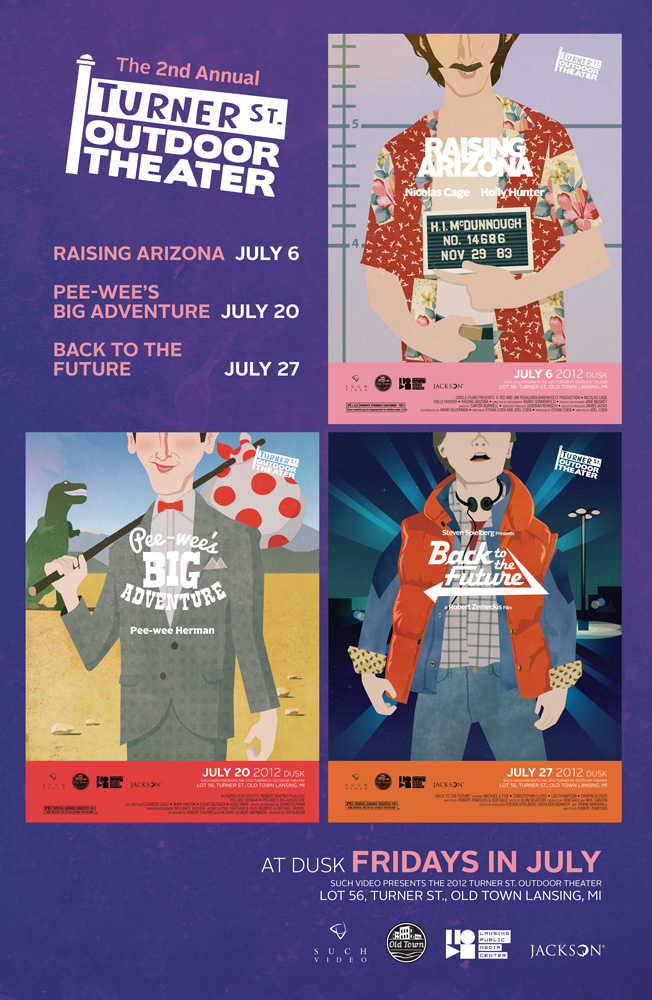 We are hosting our second annual Turner Street Outdoor Theater on Friday evenings in July, with the exception of July 13 (so everyone can enjoy Common Ground!). This free, family-friendly event will project movies in City Lot 56/Cesar Chavez plaza at dusk. Check out the Feature Film line-up below:

July 6: Raising Arizona – an action comedy about a childless ex-con and ex-cop couple who kidnap a quintuplet infant from a family who joked that they had more kids than they knew what to do with. Nicolas Cage and Holly Hunter star in this 1980’s classic film.

July 20: Pee-wee’s Big Adventure – an adventure comedy starring Paul Reubens and directed by Tim Burton. This classic feature film tells the story of an eccentric man-child who embarks on the biggest adventure of his life across the country, as he sets out to recover his stolen bike.

July 27: Back to the Future – an adventure comedy starring Michael J Fox, Christopher Lloyd and Lea Thompson. This 1980s classic is about a young man who time travels back to when his parents were young and accidentally prevents them from ever meeting, putting his own existence at stake.

Movie goers can pull up their lawn chairs or keep it cozy in their car and tune in to enjoy a movie under the stars. Cravings Gourmet Popcorn will be selling a Commemorative Movie Box including: big bags of movie and 3-way mix popcorn, a tall bag of caramel popcorn, four beverages and a special addition poster for each movie. The event is being kicked off in conjunction with Lansing First Friday, with extended hours and specials at many of the stores throughout the district.

This event is generously sponsored by Such Video, Lansing Public Media Center and Cravings Gourmet Popcorn.